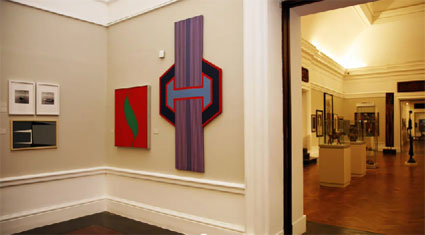 LS7303 at extreme right of image

Copyright to this work is held by the SA National Gallery, Cape Town. The above image was taken in 2005 by Cecil Kortjie, Iziko Museums of Cape Town

"Mzwandile who had been in love with Ntombise for over a year came home from the mine where he worked, to pay lobola for his long-loved sweetheart.

Then she fell pregnant - great joy to Mzwandile and his family. Then came the time for him to go back to work because he had completed his mission.

His wife Ntombise received letters, presents and of course some money which she appreciated. During Mzwandile's absence, a baby boy was born and some presents poured in; Mzwandile's happiness was felt.

Then Ntombise became bored. Years went past - she went to her mother-in-law and said: Mama, this child is growing fast, and in all these many years now, he hasn't got to know his father!

The first year, Mzwandile promised he'd come home for Christmas. Then it was the same promise the second and the third year. Now this is the fourth year. If he does not come home this Christmas, I'm leaving you and his child, I can't stand it any longer!

I have waited too long."