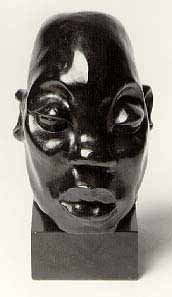 Unauthorised cast of LS6003 made in Pretoria (Vignali?)

To see original from which this unauthorised cast was made by first owner, see LS6003

This bronze was brought by 2nd owner to Gallery 21, Johannesburg, in about 1979 and photographed by Mike Robinson. Lucas SITHOLE confirmed that he never got any money for this edition.

The title "Miner's head" was confirmed by Mariete Marvin in 1981 and is probably the original name from the records of the AFG!